Usage of Indefinite Pronoun in sentences.

In a sentence an Indefinite Pronoun is used as Subject or Object when subject or object of the sentence is not specific or certain. These are expressed in general terms.
For example :
Anybody, Anyone, Anything, Nobody, None, Nothing, Somebody, Someone, Something, Everybody, Everyone, Everything etc.
Some of these Indefinite Pronouns are always used as singular, some as plural and some as both singular and plural.
Indefinite Pronouns used as Singular --
One, Everyone, Nobody, Somebody, Anybody, Each, Every etc.
Indefinite Pronouns used as Plural ---
Many, Several, Few, Both, Others etc.
Indefinite Pronouns used as Singular and Plural ---
Most, All, None, Any, Some etc.
NOTE : A verb is used in a sentence according to its Subject. So to find in an error in a sentence it is very important to identify  Subject in it.
Sentences with Indefinite Pronouns used both as Singular and Plural.
Most of the work is complete.
Most of the boys are absent.
All was lost in disaster.
All  were present there.
None  is responsible for this.
None of them were present.
All did not leave some are still there.
All work is not complete,some is near completion and other is yet to be started.
EXERCISE FOR PRACTICE
Find out error if any in the following sentences.
1. Most of the machinery parts imported from Russia is reported to have developed some technical fault and as such are required to be  replaced.
(Hint : There is hint of error in this sentence itself.
" Most of the machinery parts"
"is reported to have"......"are required to be". As subject is plural verb too should be plural ,It should be "are reported" like "are required to".)
2. One of the players selected for tournaments are likely to be detained and may not be sent for  training because of his pre-engagement.
(Hint : In this  sentence for the singular  subject "One of the " singular verb "is" in place of "are" is required.)
3. Many of the decisions taken by the committee in the meeting yesterday was unanimous except one controversial one which was passed through voting.
(Hint : In this  sentence for the plural subject "Many of the decisions" a plural verb "were" instead of " was" is required.)
4. It is important to remember that the vast majority of the people living in this area are farmers with a limited amount of land and scarce sources of income.
(Hint : In this sentence for "the vast majority " singular verb  "is" instead of "are" is required.)
5. This bill is not likely to be passed in the house as a majority are not in favour of its passing.
(Hint : In the latter part of the sentence"a majority " is subject and is singular. So a singular verb is required. It should be "a majority is".)
CONTD. 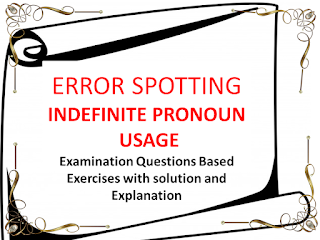