PARTICIPLES -- PRESENT , PAST AND PERFECT PARTICIPLES - USAGE AND COMPARISON EXPLAINED IN SENTENCES.

Verbs are of two types -- Finites and Non-Finites , the former change with person, number of Subject and tense used in a sentence whereas the latter don't have any effect of these on them.

He often sees him playing in the ground.

I often see him playing in the ground.

We often see him playing in the ground.

I saw him playing in the ground.

In the sentences written above, the verbs sees, see, and saw are changing with the change of  person from he to I or we and tense from present to past tense. But the second verb in these sentences 'playing' remains constant in all these sentences. Verbs like 'Playing' which do not have any effect of any change of person, number or tense on them are called Non-finite verbs.

Non- Finites are also called Double Parts of Speech because these are verbs but act as Noun, Adjective or Adverb. These are also called Verbal-nouns or Verbal-adjectives etc.

Non-finite verbs or Non - finites are of three types.

2. Infinitive - First form of a verb preceding with 'to' used as a noun is called infinitive.

Participles are of three types.

Present Participle is formed of first form of verb and 'ing' for example : breaking , carrying etc. It denotes continuity of action or  incomplete or unfinished action. It acts as an adjective. It is also called 'Verbal Adjective'.

The verbs 'going' and 'waiting' in the sentences written above denote continuity of action and unfinished action.

In the first sentence the verb,( go +ing) 'going' is basically a verb but it describes the pronoun 'him' prior to it and as such acts as an adjective. So it is Present Participle. Similarly 'Waiting' in the second sentence is also a verb acting as an adjective describing pronoun 'us'.

In this sentence 'growing' is a verb and describes noun 'children'. It is a verb acting as an adjective and is called Present Participle.

In the sentences 1 and 2 Present Participle is in Predicative position whereas in 3 it is in attributive position.

In sentences 4 and 5 the verbs 'willing' and 'being' are acting adjectives but these are independent of verb of the sentence. These are not subject, object or complement in these sentences. These are Absolute Present Participle.

This sentence is formed of two sentences combined together.

The child saw a wolf. He started crying.

A verb in its third form acting as an adjective i.e. describing a noun or a pronoun is called Past Participle. For Example :

She is a retired teacher.

In this sentence 'retired' is third form of verb 'retire' and describes the noun teacher following it. It is Past Participle.

In this sentence 'gone' the third form of' 'go' acts as an adjective describing the noun 'time'. It is a Past Participle. A Past Participle represents a completed work in the past.

It is also called verbal adjective because it is averb acting as an adjective.

1. If the temperature fluctuates, it will cause frozen foods to lose their moisture faster and they will become drier and tough.

'Frozen' in this sentence is third form of verb 'freeze' but is describing the noun 'foods' and acting as an adjective. It is Past Participle.

2. He preferred to pave a new way for himself instead of treading on a beaten track.

In this sentence beaten is third form of verb beat and describes the noun track and acts as and adjective. It is a Past participle.

3. The burnt child dreads the fire.

In this sentence 'burnt' third form of verb 'burn' acts as an adjective describing noun 'child'. It is a Past Participle.

Perfect Participle is used when after completion of one action another action is undertaken. The second action may be continuing or may have finished.
For this following methods are used :
1. Having + third form of verb.
2. Being +third form of verb.
3. Having been + third form of verb.
1. The subject after doing one work starts another work.
2 & 3. Subject himself does not do any work but experiences work done by another person.
1. HAVING + THIRD FORM OF VERB
In this case the subject does both the works himself . It is written in active voice.
For example :
1. Having finished your work you can go.
In this sentence both the actions are to be undertaken by th subject you. So it is in active voice.
It can be written in this way also.
You having finished your work can go.
2. Having taken her dinner, she went to bed.
3. Having finished their homework, the children went to play.
4. He having completed his studies, will go abroad.
5. He having taken his breakfast, went to his office.
2. BEING +THIRD FORM OF VERB
In this type of sentences one action is done by the subject and that is written in active voice. But the other action is done by some other person.
For example:
Being indisposed he did not go to office.
In this sentence the action  that he did not go office is done by the subject himself.  This part of the sentence is in active voice. The other action has not been done by the subject he.
This sentence can be written in this way also.
He, being indisposed, did not go to office.
3. HAVING +BEEN+ THIRD FPRM OF VERB
In this case an action is done by subject himself and that part is in active voice but the other is done by some one else. So that part is in passive voice. For example:
Having been injured, he started crying.
The action 'he started crying' is done by the subject and is in active voice. But he was injured by someone else, so it is in passive voice.
Having been forced by his boss, he left the job.
In this sentence the subject did one work and he left the job. This part of the sentence is in active voice. The other action was taken by the boss, tis part of the sentence is in passive voice.
This type of sentences can  be written in negative also.
Not having been taken into custody, the thief managed to escape.
In this sentence the subject the thief did one work himself but the other work was done by other.
EXERCISE FOR PRACTICE
Select the appropriate word out of the given options suitable for the sentence.
1. Hearing/heard the loud noise, the child woke up.
2. Having heard/hearing the news all of them rushed to see him.
3. Being/Having been exhausted, he decided to take rest.
4. Fearing/having feared his arrest, the thief took to his heels.
5. Not having been/ Not being  invited to the party, I did not attend it.
6. Having considered/being considered his suggestion, I decided to purchase this house.
7. Having /Being finished his breakfast, he left for his office.
8. Following/having followed the written instructions, I operated the machine.
9. Having been/Being rewarded for his services, he felt elated.
10. I, having been/being cheated by the shopkeeper, I stopped visiting his shop.
14. The institution proposes to implement a scheme under which the defaulting/ defaulted members will have to pay fine on the defaulted/ defaulting amount for the defaulting/ defaulted period. 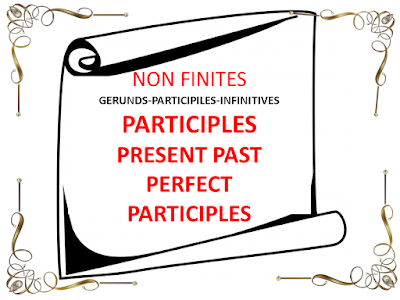