PARTS OF SPEECH - PREPOSITION (2) AT, OF, TO,FOR, AGAINST - EXAMPLES, EXPLANATION WITH USAGE.

Meaning, Definitions, Its Types,
Different Words Taking Prepositions
With Them - Explanation And Their
Use In Sentences.

A Preposition is a relating word used with a Noun or a Pronoun showing their relation with the remaining words denoted by these in the sentence.

In other words a preposition relates a Noun or a Pronoun to other words in the sentence. It is used before a noun or a pronoun For example, on the table, under the bridge, with a stick, by him etc.

He does not care for his parents.

Take care of your health.

In the following two sentences 'Surprise' is used as verb.

A preposition is used,  according to its requirement, in the beginning, in the middle or at the end of the sentence.

For example :
He deals in sugar.
He has a great thirst for wealth.
She has no grief at the loss of her wealth.
Service to mankind is service to God.
To live we all eat.
For all, he is a good person.

Similarly in interrogative sentences, a preposition is used in the beginning or at the end of the sentence.


Here follow different words with prepositions they take with them.

These all Past Participles of verbs  take with them preposition'at' when followed by a noun. These words meaning 'to be taken aback' are used in passive voice of a sentence.
For example:

He was surprised at his behaviour.
We were alarmed at his rudeness.
She was shocked at the sight.

Generally in Passive Voice 'by' is used. But with these verbs in Passive voice instead of 'by', 'at' is used.

This news shocked her.
She was shocked at this news.


But when a verb follows these words, preposition 'to' is used with them.
For example:
He was surprised to find him missing.
She was shocked to see him there.
Boys were amazed to witness the scene.

In Active Voice these words do not take any preposition with them.

His behaviour surprised me.
The scene shocked the viewers.
Children's ability astounded the teacher.
Her brilliance in this field astonishes me.

These words denote activity of laughing etc. These all take preposition 'At' with them. The words Jeer, Sneer, Mock, Chuckle,Grin are used in negative sense. Whereas other can be used in both negative and positive senses.

For example :
The lady smiled at the child.
Children laughed at the beggar.
All the people jeered at his behaviour.
His class mates mocked at his hair style.
All the members grinned at her confession statement. 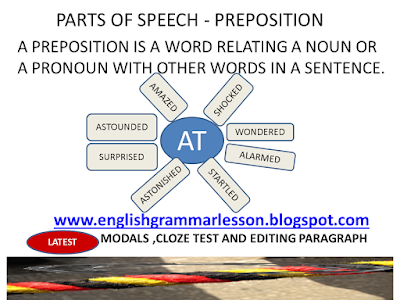 
Wish for, Yearn for, Hope for, Long for, Pine for, Desire for, Affection for, Lust for, Passion for, Inclination for, Fondness for, Eager for.

These all words take preposition'for' with them. These words mean 'to have a desire'.


For example:
He wished for a huge mansion for himself.
She is pining for her love.
They all hope for a favourable change.
He has a strong passion for music.
The mother has a great affection for her child.
The old man has fondness for Shakespeare's plays.
The boy is eager for name and fame.

But these words when used as other part of speech they take a different preposition with them.
For Example :

He is fond of reading books.
He is desirous of going abroad.
He is hopeful of meeting his brother soon.

These words, meaning some treatment or solution, take 'For' with them.
For example :
Scientists suggest planting more trees a panacea for global warming.
There is no remedy other than physical therapy for this disease.
The researchers are trying hard to find cure for this disease.
He should  get a regular treatment for his ailment.
Positive thinking is antidote for depression from which he suffers.

These all words, meaning showing sincerity, take preposition 'to' with them.

He is obedient to his parents.
She is faithful to him.
The boy is sincere to his duty.
They are dedicated to the cause of country.
Find a file attached to this mail.
He is true to his word.

All these words mean something causing harm. These all take preposition 'to' with them.
For example :
Smoking is injurious to health.
Heavy rains are harmful to crops.
Floods pose threat to standing crops.
His actions proved detrimental to the interest of the family.

All these words, used to show relation, take preposition 'to' with them.

She wore dress appropriate to the occasion.
These rules are applicable to all the people.
This house relates to his brother.
He showed interest in literature cognate to philosophy.
He submitted reply quite apposite to her question.
He tried to find evidences pertaining to this case.
They were agreeable to his proposal.

All these words, meaning being agreed to something, take preposition 'to' with them.

The chairman acceded to his request.

The old man consented to his son's proposal.
She agreed to stay at home in the evening.
The members assented to his proposal.
His friends were amenable to his idea of going for a picnic.

All these words, meaning showing similarity to something, take preposition 'to' with them.

He paid equal to half of the total money.
He bought a chair similar to this chair.
Her comments about him are akin to accusing him.
Both the pictures he drew are identical to each other.
His statement is tantamount to his admission of guilt.

These words denote some note or views preceding some writing work etc.These all take preposition 'to' with them.

The Principal added a prologue to the book written by me.
This chapter gives introduction to the subject matter of the book.
In the beginning there was a foreword to the book.
A preface to the book preceded the chapters.

These all words meaning to think deeply take preposition 'over' with them.

For example
The government is mulling over implementing this scheme.
They are thinking over your proposal seriously.
The old man often broods over his past days.
I shall ponder over your suggestion.

All these words, meaning to be filled with, take preposition 'with' with them.

This forest is infested with wild animals.
He was overwhelmed with happiness.
The drain was congested with garbage.
She is gifted with the talent of her sweet voice.
The old man was bestowed with costly gifts.
The hall was crowded with boys and girls.
Her mother was filled with joy.
The jug was brimming with water.
The room was packed with men and women.

These words meaning appearing from take preposition 'from' with them.

This road originates from the fort.
All of a sudden he emerged from the crowd.
A loud sound emanated from the room.
This idea sprang from her suggestion.
A sapling arose from the seed.

These words hint about stopping or separating from something, take preposition 'from' with them.

You should abstain from smoking.
He was debarred from participating in the event.
Trees protect us from sun and rain.
This wall  separated my house from that house.
My principles prevent me from doing this.
His friends saved him from being arrested.

These words hint at drawing a conclusion and these take preposition 'from' with them.

I deduce from her statement that she is quite intelligent.
Nothing could be concluded from the discussion.
These estimates were inferred from the data available with them.

These words, meaning to free from some charges etc., takes preposition 'from' with them.

The court absolved him from all the charges.
He was exonerated by the court.
These items were exempted from tax.
After war ended, many slaves were liberated from prisons.
The prisoner was set free from prison.
He could hardly emancipate himself from shackles of poverty.


These words take preposition 'against' with them.

He lodged a complaint against him with police.
Boys protested against his rude behavior.
The lady was leaning against the wall.
His father warned him against bad company.
The car struck against a stationary truck.
We are determined to fight against evil forces.


These words,  meaning to be without or to be wanting, take preposition 'of' with them.

The poor is deprived of basic facilities.
All the roads were quiet and devoid of vehicles.
The lawyer submitted his statement bereft of any evidence.
The poor were starving for lack of food.
There is no dearth of talent among the youth of today.
He was stripped of his all benefits.
The project failed due to paucity of funds.
Deficiency of funds marred the progress of the project.

Email ThisBlogThis!Share to TwitterShare to FacebookShare to Pinterest
Labels: English Grammar Lesson -- Parts of Speech Their types, Parts of Speech : PREPOSITION -- Definitions and explanation with examples.