Words grouped together in a way that makes a sense and meaning are called a sentence.Different words called parts of speech have their specific place and role in a sentence. These parts of speech are Noun, Pronoun, Verb, Adjective, Adverb, Preposition, Conjunction and Interjection.

An Adverb is a word that is used to qualify any part of speech in a sentence except a Noun, Pronoun or Interjection.

A word that modifies anything except Noun, Pronoun and Interjection in a sentence is called an Adverb.
For example :

In sentence 1. the word carefully modifies the verb walk in the sentence.

In sentence 2. the word very modifies the adjective good in the sentence.

In sentence 3. the word very modifies the adverb fast in the sentence.

In sentence 4. the word exactly modifies the preposition over in the sentence.

In sentence 5. the word ever modifies the conjunction since in the sentence.

Luckily, we were in time.
Incidentally being here, he attended the meeting.

Adverbs are classified into three as follows:

A simple adverb qualifies the word with which it is used. Simple adverbs, according to their meaning, may be divided into following classes :

1. Simple Adverb of  TIME :
These are adverbs showing time of action taking place.

She will reach soon.
He goes to office daily.
They will leave tomorrow.
We met him yesterday.

These adverbs show where the action is done.

Both of them went there.
She will come here.
Boys are moving hither and thither.
They live near my house.

Simple adverbs of place are : Here, there, up, down,out, in, above, below, within without, inside, outside, far, near, hence, thence, anywhere, everywhere, beside etc.

These words show how many times a work is done.

He appeared twice in the examination.
He always speaks the truth.
He seldom tells a lie.
She often meets him.


4. Simple adverb of MANNER : These adverbs show how the work is done.

The child sleeps soundly.
She speaks sweetly.
She performed well.
They worked hard.

5. Simple adverb of  DEGREE OR QUANTITY :

These adverbs show of how much degree or to what extent a work is done.

I am much obliged to you.
As far as I think, he is right.
She is quite well now.
They are almost ready.

6. Simple adverb of  REASON OR RESULT : These adverbs show reason or result of an action.

I did not go out because it was raining.
It was hot therefore I stayed in.

Simple adverbs of reason or result are : Hence, therefore, as, since, so that, such that, thus etc.

7. Simple adverb of PURPOSE : These adverbs show purpose of an action.

He worked hard so that he may pass.
They halted in order to take rest.

Simple adverbs of purpose are : so that, in order to, with a view to, with the purpose of, with the intention to etc.

8. Simple adverb of COMPARISON : These adverbs show comparison of an action.

She is more beautiful than her sister.
He is as intelligent as his brother.

Simple adverbs of comparison are : as-as, more-than, less-than, the most, the least etc.

9. Simple adverb of EXTENT : These adverbs show the extent or limit of an action.

The higher you go the cooler it is.
So far as I think he is sad.

Simple adverbs of extent are : so far as, as far as, the--the etc.

10. Simple adverb of CONCESSION OR CONTRAST : These adverbs show concession or contrast of an action.

Although he works hard, he will not succeed.
However hard he may try, he is sure to lose.

Simple adverbs of concession or contrast are However, although, though, yet, even if etc.

11. Simple adverb of CONDITION : These adverbs show a condition of situation under which an action is done.

Simple adverbs of condition are If, Had, If not, on condition that, unless etc.

12. Simple Adverb of AFFIRMATION OR  NEGATION : These adverbs affirmation or negation of an action.

I certainly went there.
Surely he is right.
She never said so.
No, I am not willing.

Simple Adverbs of affirmation and negation are certainly, surely, truly,definitely, no, not never etc.

A relative adverb joins two sentences and explains about time, place, reason or manner in relation to the noun preceding it.

We cannot guess where he has gone.
I do not know  when he will return.

Functions of a Relative Adverb :

1. As an adverb it modifies a verb.
2. It joins two sentences.
3. It shows relation with the preceding noun.

I do not know the place where he lives.
I cannot say when he will return.

How long are you to stay here?
When is she expected?

Where are you living?
Where she comes from?

How often do you visit her?

How do you feel now?
How did you get this book?

Why are you looking so sad?
Why did you behave like this?


Most of the Adverbs have the same form as
the corresponding Adjectives; as ,

It took us long to reach there.
The boy cried loud.
He reached there early.
They all came late.
He only glanced at her.
The poor was paid little.
He ate much to his fill.
He earned enough to spend.

He has given a long rope to his children.
The child cried in a loud voice.
He is an early riser.
Late comers were not allowed to enter.
The  students only attended the seminar.
The poor was paid little money.
He has earned much money.
We had enough food with us to eat.

An adverb is used---

1. Next to the word or words it qualifies.

This is a very big house.
He is not a well behaved boy.
They have almost achieved the target.
Down went the building.

2. After the intransitive verb.

She wept bitterly.
They walked fast.
You reached late.
They live here.

3. Either before the transitive verb or after the object.

4. Between the Auxiliary and Main verb

He does not like her.
I will certainly miss her.
They will surely win the game.

5. At the beginning of the sentence

How often have you made the attempt?
Down came the wall.

Use of the word 'Enough' in sentences.


The patient is strong enough to walk.
He was rash enough to interrupt.
You know well enough what I mean.
He spoke loud enough to be heard. 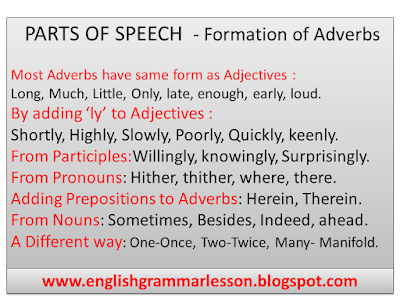 Fill in the blanks in the following sentences with adverbs of given words. 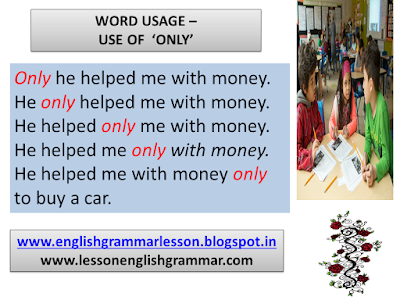 Email ThisBlogThis!Share to TwitterShare to FacebookShare to Pinterest
Labels: ADVERB -- Definitions and explanation with examples., English Grammar Lesson -- Parts of Speech Their types