This sequence comprises of words having their own meanings but this group of words does not make any sense.

The arrangement of these words to make a sentence should be :
Rome was not built in a day.

Every word has its place and function in a sentence.

For example 'Rome' and 'day' are nouns, 'built' verb and 'in' a preposition etc.

These words are classified according to their form, usage and structure as different Parts of Speech namely, Noun, Pronoun, Adjective, Verb, Adverb, Preposition, Conjunction, and interjection.

Adjective is explained in detail here-under.

A word used to qualify or describe a Noun or Pronoun is called an Adjective.

An adjective is a word used with a Noun or a Pronoun to add something to its meaning.

For example :
A clever boy, An intelligent girl, an honest man, a cloudy day etc.

John is an honest man.
He is poor but happy.
She has five books.
We had enough food with us.
Several men came to see the fair.

Words in bold italics in these sentences are examples of adjective.

Adjectives may be divided into following classes :

A word that describes the type or qualities of things, persons or places is called an Adjective of Quality. It adds to the meaning of a noun or pronoun.

He is an honest man.

The word Honest adds to the meaning of the noun man. It tells about a quality of the noun Man.

The word beautiful tells about a quality of 'She'. It is an Adjective of Quality.

He is a dwarf man.
She is a pious lady.
We live in a large city.
I wear woollen clothes.
She has a red rose.

In these sentences, dwarf,pious, large woollen and red are adjectives of quality.


A word used to describe uncountable quantity of nouns i.e. things, persons or places, is called Adjective of Quantity. For example: Many people, Some villages,Much sugar etc.

These words provide answer to the question 'how much'. These are used for uncountable nouns which are not expressed in numbers.

We had enough food with us.
Many people went to see the show.
I do not take much tea these days.
Will you lend me some money.


Will In these sentences the words 'enough, many, much, some' are the words of Adjective of Quantity.

The word that expresses the quantity in numbers of nouns i.e. persons,places or things is called Adjective of Numbers. For example : Four, sixth, first, last etc.

Adjectives of Numbers are countable. They are expressed in the form of numbers.

He is the first man to win this prize.
Five of them entered the house.
I went there last of all.
She purchased two books.

In these sentences, the words 'first,five, last and two' are examples of Adjectives of Numbers.


A word used to indicate which person, place or thing is mentioned is called a Demonstrative Adjective. It is used to describe a specific noun. For example : This, That, These or Those.

He purchased this cow.
These books are mine.
That toy is beautiful.
Those toys are beautiful.

A word that is used to interrogate or put a question about a Noun is called an Interrogative Adjective. For example : Which, Whose,and What etc.

Interrogative Adjectives are used to inquire about nouns.

'Whose' means to whom the noun relates.
'Which' refers to one out of specified nouns.
'What' refers to a choice among things in general.

Some examples are :
Which book is yours?
Whose book is this?
What favour do you expect from him?


These words i.e. 'What, Which, Whose' are adjectives only when these are followed by nouns.

In the following sentence the word 'whose' is not an adjective because it does not qualify any noun or it is not followed by a noun.

Whose is this coat ?

It will be an adjective when it is followed by a noun i.e.

Whose coat is this?

Which way did they follow?
Whose child is playing there ?
What food do you take at night?
Whose shirt was torn in the brawl?
Which boy has won the prize?
What share did you get?
Which side will you go?
What amount does it cost?


A word used to refer to a member of a group as an individual is described as Distributive Adjective. For example : Each, every, either or neither etc.

In the first sentence it is stated that boys got a prize but the second sentence specifies that each of the boys present there got a prize. The word 'each' makes this distinction. It is called a distributive adjective.

Distributive Adjectives are normally used for singular nouns. Each, every, either and neither etc are used to refer to individuals.

A word used to express something in possession of a noun are called Possessive Adjective. It refers to what a noun possesses with it. For example : my, our, your, his, her or their etc.

A Possessive Adjective describes about possession of a noun and not about ownership. For example :  This is her purse. It means she possesses a purse.

His house is very far off.
Her necklace is very beautiful.
They waited for their turn.
We kept our promise.
My clothes are wet.

A word that is a proper noun in itself, comes before a noun and acts as an Adjective is called a Proper Adjective. For example : Russian vessel, English channel, China border etc.

A proper noun, as it is, is used as an Adjective or its adjective form is used. For example China and Chinese both words are used as Proper Adjectives.

Shakespearean plays are very interesting.
China goods are imported by India.
Indian tea is liked by people all over the world.
Japanese people are very hard working.
He likes to eat Mexican food.

Find out Adjectives in the following sentences
and specify their types.

1. Whose box is lying there?
2. That box is mine.
3. Many people tried to open
this box but could not.
4. This box is made of iron.
5. Many books are contained
in this box.
6. These books contain
interesting stories.
7. My brother likes reading
good books.
8.  Many people do not like
reading books these days.
9.  Young people are not in the
habit of reading books.
10. There is a dire need of
inculcating good habits
of reading books among
young men.

1. Whose box is lying there?
(interrogative Adjective)

2. That box is mine.
(Demonstrative Adjective)

3. Many (Adjective of Quantity)
people tried to open
this  (Demonstrative Adjective) box but could not.

4. This (Demonstrative Adjective)box is made of iron.

9.  Young (Adjective of Quality)people are not in the
habit of reading books.

FILL IN THE BLANKS WITH AN APPROPRIATE
ADJECTIVE OF THE GIVEN WORDS.

2. This reminded him of his glorious past.

3.Floral decoration in the room presented a
beautiful scene.

4. This famous poet is known  for his romantic poetry.

5. Neither of the two has enough experience for this post. 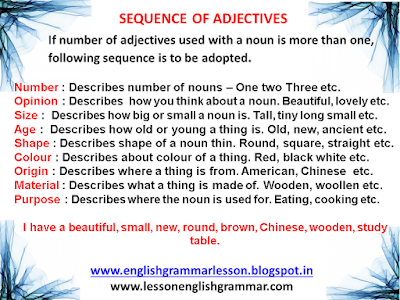 Email ThisBlogThis!Share to TwitterShare to FacebookShare to Pinterest
Labels: ADJECTIVE., Definitions and explanation with examples., English Grammar Lesson -- Parts of Speech Their types