HOMONYMS, HOMOGRAPHS & HOMOPHONES ------Their use with Explanation and Examples.

Meaning of  Homonyms, Homographs and Homophones ---- Their Explanation and  Use in Sentences :

Homonyms are the words that sound alike and have same spellings but have different meanings. Desert and Desert, Stalk and Stalk, Bear and Bear, Bark and Bark  & Watch and Watch.

Homo means --Same and Graph means --  to draw or write as in biography meaning to write about life.So

Homographs mean the words written in the same way i.e. words having same spellings though they may or may not  sound alike yet have different meanings.

Read and Read, Row and Row, Bow and Bow, Scale and Scale, Wind and Wind & Well and Well.

are words that sound alike but have different spellings and different meanings.

Ate and Eight, Blue and Blew, Bail and Bale, Brake and Break, Complement and Compliment, Deed and Dead, Die and Dye,Dear and Deer, Fair and Fare,Flour and Floor, Gate and Gait, Hail and Hale, Hear and Here, Heal and Heel, Marry and Merry, Pair and Pare, Read and Reed, Right and Write, Sail and Sale, Stares and Stairs,Sight  and  Site or Cite, Tale and Tail, Vale and Veil & Waist and Waste etc.

It is most likely to make wrong use of   words looking and sounding alike but having different meanings. For this knowledge of  correct and  appropriate meanings of words is necessary. Only this  makes it possible to distinguish between the difference in meanings of these words. 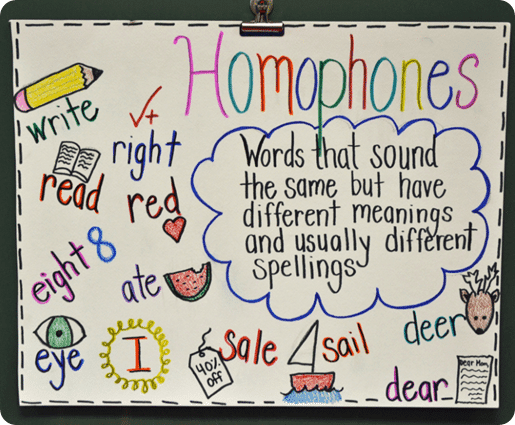 Here is a list of  homophones and homographs with their meanings and use in sentences for understanding. 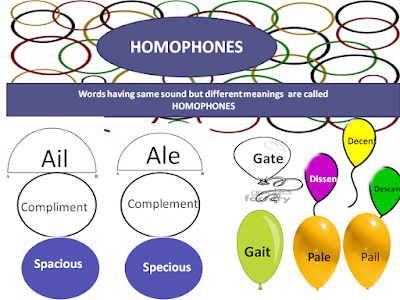 Apprise:  ( to acquaint or to provide information) : The manager apprised the boss about the latest developments in the office.

Appraise : ( To assess or to evaluate ) : The banker got the value of ornaments appraised from the valuer.


Auxiliary: ( Supporting, Supplementary ) : In emergency, the auxiliary staff was put on duty in the hospital.

Axillary : ( Related to axis ) : The axillary rod of the wheel was replaced by the mechanic.


Antic : ( adventurous experience or actions) The children enjoyed themselves to see antics of the juggler.

Antique: ( Traditional or relating to old times) We went to see antique weapons displayed in the museum.

Apposite: ( Relevant, Appropriate ) : We all were saved by apposite remarks made by the chairman about the incident.

Opposite : ( Contrary, Contradictory ) : He started his car and fled in the opposite direction.


Affect ( Verb,To show impact, or to feign) The changing climate has affected the cropping pattern of this area. OR She affected to be sick on that day.

Effect : ( Noun,Influence) : My advice had no effect on him.


Ale : ( Drink or wine) The tribal people served ale to their guests.

Ail ( to be sick) His ailing grandmother expired yesterday.


Alley :( street): We wandered through the winding alleys of the old city.


Allusion :( Indirect reference) The speaker made several allusions from holy scriptures in his speech.

Illusion : ( misconception) : He was having an illusion of surpassing his targets this time.

Beside : ( By the side of ) : The child was sitting beside his mother.

Besides : ( In addition to ) : Besides the teacher there were two students also present in the room.

Bear : (to tolerate) : The old mother had to bear the loss of her money.

Bear : ( an animal) : The juggler presented his show with the help of a bear and two monkeys.


Bridal :( relating to a bride) : The girl wearing bridal dress was looking pretty.


Bridle : ( Rein, restraint) : There is a need to bridle the powers of the dictator.


Complement : (to supplement) : She started working in an office to complement his father’s income.

Compliment : ( comments of admiration or praise) : We paid our compliments to him on his success.


Continuous : (to continue without a break): The authorities ensured continuous supply of food articles to the army.

Continual : ( to continue intermittently) : The continual rains are good for crops.

Confident : ( Poised, Assured) : The young man is confident of his success in the examination.

Confidant : ( Trust worthy, intimate) : The manager is a confidant of the boss.

Considerate :(  Thoughtful Careful) : He is very considerate of helping me.

Considerable :( Substantial, Sufficient) : A considerable time has elapsed when you visited us last.

Council : (committee) : He is a member of municipal council.

Counsel :(Verb,to advise, to guide): I tried to counsel with him but all was in vain.

Counsel: (Noun, adviser): You should consult some legal counsel for his advice.

Conscious: ( aware) : He is conscious of his shortcomings.

Conscientious : (  diligent Hardworking) : You can depend upon such a  conscientious  worker like him.

Cell : (Prison apartment) : The prisoner was kept in a dungeon cell for many months.

Cell :( small battery ) : I purchased two pencil cells from the market for my clock.

Sell : ( to give for money) : He is not willing to sell his house now.

Spacious : ( Having sufficient space): His new house is very spacious.

Specious : ( False, Inaccurate): Do not rely upon his specious assurances.

Proscribe: ( Ban, forbid): This book is proscribed by the government.

Prescribe : ( advise) : Take this medicine as prescribed by the doctor.

Lessen : ( to reduce) : This medicine will lessen your pain.

Lesson : (class lesson moral) : His message always contain a lesson in it.

Facility : ( Provision, flair): All the facilities were provided to the guests.

Felicity : ( Joy, Pleasure) : The speaker welcomed the guests with a great felicity.


Founder : (the person who founded) : The founder of this charitable institution was a very noble man.

Founder : ( To fail miserably) : The peace committee foundered  in its efforts to restore peace among the two factions.


Gait :( way of walking) : She is very proud of her graceful gait.

Gate :( entrance) : The host welcomed the guests at the gate of his house.


Incite : ( to provoke) : His provocative speech incited the workers.

Excite: ( Enthuse) : The children were very excited to go out for a picnic.

Illicit : ( against social norms) : She has illicit relations with her boss.

Elicit :( stimulate bring about) :The inquiry elicited many unknown facts about the case.

Illegal : ( against law) : He amassed huge money through illegal means. 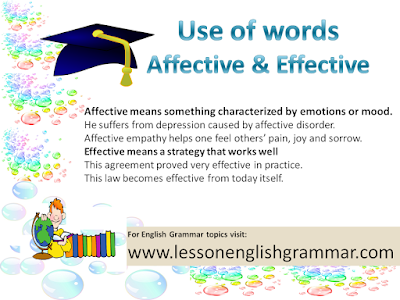 Ingenious: ( creative,clever) : Inventions are made by persons with ingenious minds.

Collusion: ( involvement) : The police is working in collusion with criminals.

Collision : (to strike against) : There was a collision between a bus and a truck on the road.


Dissent :( Differ): I dissent with his views on this point.

Decent : ( Good ) : His behaviour towards his fellow workers was very decent.

Descent : (Downward slope) : The descent of the mountain was very steep.

\Wary : ( Alert ) : The behaviour of the guard was wary towards all.

Clothes : ( Stitched clothes) : The washer man was washing our clothes. 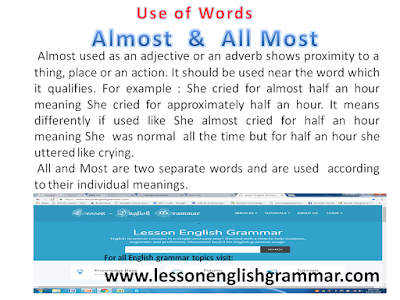 (Exercise of Homophones for practice)

Fill in the blanks with a word out of given in options :


Posted by lessonenglishgrammar.com at 02:43 No comments: