MODALS (1) -- MEANING & WORDS WOULD, USED TO, AS MODALS EXPLANATION WITH EXAMPLES

A verb  is an essential part of a sentence.There is no sentence without a verb. Verb is a part of speech that forms and completes a sentence. A verb with subject or object is required to form a sentence.

The main modal verbs are - Shall, Will, Should, Would, May, Might, Must, Need, Dare, Ought to, and Used to. For example :

I shall write a letter.
He used to play hockey in school days.

Modal verbs are always auxiliary verbs. They are used as helping verbs with main verbs.

He should take rest.
You must attend the meeting.

Modal verbs always take  bare first form of verb with them.
For example :

I should 'go' there.  (Present Tense)

In order to express in Past tense, verb of Perfect tense is used.

For example:
He should have gone.

Because a modal always has first form of verb, 'have' (and not 'had') is used here to express past tense even. 'Have' as a helping verb always takes third form of verb with it. So 'gone' is used here. Even in case of third person singular, 'Have' is used and not 'Has'.

For example :
He must have gone by now.
and it is incorrect to say -
He must 'has' gone by now.


'To' is not used with these Modal verbs except in case of 'Ought to' and 'Used to'.

He used to fly kites in his childhood.

Modal verbs are not used as main verbs except 'Dare' and 'Need'.

I need some money. (Main Verb)

You need not worry now. (Modal verb)
Here need is a modal verb and worry is main verb.

Here follows how some of peculiar Modal Verbs are used in sentences.

The Modal Verb 'Would' denotes some activity of habitual nature taken place in the past.

He would go to school on foot during his school days.

This sentence expresses that he was in the habit of going to school on foot in the past.

He would drink during his youth.
He would work hard during his school days.

'Used to' is also a Modal Verb. 'To' always accompanies the word 'Used'. It expresses an action of habitual nature taken place in the past. First form of verb is used with the Modal Verb of 'Used to'.
It is used to express past action only. The action that took place in the past and ended during that time. It did not extend to Present or Future time. So it is not used for Present or Future time.

The modal verb 'Used to' is used as it is and its formation cannot be changed to present of future time.

For example:
He used to play Hockey in his school days.
He used to be very shy during his childhood.


In these sentences 'used to' is modal verb and 'play' and 'be' are main verbs.

These two words written separately give different meanings and cannot be termed as Modal Verbs. For example 'Use' is a main verb and it means to utilise and 'to' is used  with it.

For example:
Wax is used to prepare candles.

In this sentence 'Used' and 'to' are used as separate words and cannot be termed as Modal Verb. It gives the meaning that wax is utilised for making candles.
This sentence is in passive voice. Its active form is -
They use wax to prepare candles.

He is used to gambling.
This sentence means that he is in the habit of gambling.

Similarly it can express action of past also.
For example :
He was used to playing hockey during those days.

In such a case after 'Used to' a noun is used and 'used to' becomes an adjective as it describes a noun. In these sentences 'gambling' and 'playing' are gerunds used as nouns. So here 'Used to' acts as an adjective describing nouns following it.

USE OF MODAL VERBS 'WOULD' AND 'USED TO' AS INTERCHANGEABLE WITH EACH OTHER.

The use of two modal verbs 'would' and 'Used to' is interchangeable. These can be used in place of each other.

Here is another example.

He would be an intelligent student during his school days.

He used to be an intelligent student during his school days.

Both these sentences describe about condition of 'he' in the past but only  the latter one is correct. Here it is incorrect to use 'would'.

Verbs are of two types -- Action Verbs and Static Verbs.

Action verbs denote doing some physical activity by the doer but Static Verbs show condition or state of a person.

With Static Verbs only 'Used to' is applied. 'Would' is not used with these verbs.

He used to be a renowned singer in the past.

It is a correct sentence whereas it is incorrect to say
He would be a renowned singer in the past.


In these sentences 'would' is not interchangeable with 'used to'.. 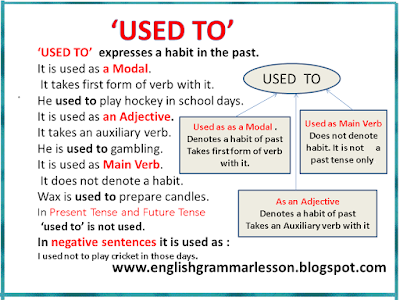 Choose the correct option to substitute the selected part in the following sentences.

1. Both the brothers used to practising these tricks in the past.


2. Her brother would accompany her when she went there.


3. The sculptor used to preparing beautiful idols when he was young.


4. Her mother  used to teaching her English when she was young.


5. She would get up early in the morning during her stay at ours last year.


6. Her father was used to take his dinner very late at night.


7. Their mother would told stories to the children at night.


8. I used to boarding a train to go to my office when I was in the city.


9. Her sister used to learn poems by heart when she studied in the school.


10. Our teacher would be very strict when he taught us in the class.

Email ThisBlogThis!Share to TwitterShare to FacebookShare to Pinterest
Labels: MODALS-- DIFFERENT WORDS USED AS MODALS THEIR USE IN SENTENCES -EXPLAINED-- MODALS -- USE AS OTHER PARTS OF SPEECH