Meaning of the phrase/clause/word used in sentences with explanation


1. To Pull Oneself Together

Meaning   -- To calm down.
-- To stop being angry or agitated.
-- To maintain one's composure.

When one tells someone to pull himself together what he is required to do id to calm down
--- to stop being angry or upset about something. In other words one is required to regain one's composure. For  example -

He has been tough on others whenever things don't go according to the plan. He was told to pull himself together.  Meaning thereby to cool down or not to be agitated under the situation.

Use in a sentence:

Meaning   --To feel perfectly all right if earlier not so good.


If something is not going so good but after doing something or taking some  action things have gone under change perfectly as required, it is said that things have been 'right as rain.'


Use in sentence
After recovery from her illness, she is feeling right as rain now.


After a minor repair my car is right as rain.


Meaning  -- To make a new or fresh start.
-- To create something new.

This expression appears to have its origin from sports. In earlier times a line was scratched on the ground at the point of the start with the help of a stick or a stone.Every player started the game from that line. Every fresh start was to be made from that scratched line.

My boss did not like my project report. So I had to discard everything and start from scratch.


They are not interested to purchase an old factory.They want to start their own from scratch.


4.Burn A Hole In The Pocket

Meaning  -- To spend money as quickly as possible.

The money she received this morning was burning hole in her pocket.
Stop behaving like a teenager with money burning hole in your pocket. If you want to buy a house you need to start saving money.

Meaning  -- To start something too soon.
-- To act hastily.

This expression appears to have its origin from sports. A game is started with the firing of a gun in the air.Every player is required to start only when the gun is fired.If someone starts prior to that he or she is said to have jumped the gun.So doing an act out of turn is called jump the gun.The word 'Jump' in the phrase indicates a sudden movement as a jump in the queue or jump the signal. So this phrase is also used for anything done too soon.

He tried a number of times to jump the gun to deliver his lecture but the secretary did not allow him.
She is in the bad habit of jumping the gun while marking morning attendance in the register.

7. Put Lipstick On A Pig

Meaning  -- To make superficial changes to  make something more appealing.

It is to make a temporary solution of a problem by making minor changes which are not effective. These are only to make believe the people that everything is as required. It is only to befool the people.

If one says he had a blast he means that he enjoyed himself to the fullest. He had a very good time. Generally this expression is used for saying about enjoying in a party with friends or family members etc. It has nothing to do with the literal meaning of the word blast as it appears to be.

On New Year's eve I went out with my friends for a party and we all had there a blast.
I still remember the farewell party of the college where we all class fellows had a blast.

9. On A Slippery Slope

Meaning -- To be surrounded by a  number of
problems beyond one's control.

On a slippery slope means  to be in a situation which is beyond one's control and is full of problems. One cannot escape from the  situation once one gets into it.

He confirmed  to the boss that he would complete the project within a week but now he finds himself on a slippery slope as it seems not possible for him.

She was on slippery slope when she tried to please both of her sons by giving valuable presents to them.

Meaning -- To be humiliated

When one is made to eat a humble pie it means that one is humiliated. One is put in a humiliating situation. 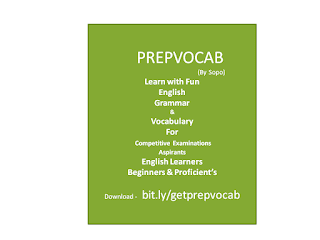 Posted by lessonenglishgrammar.com at 05:54 No comments:

(Based on latest changed style used in Competition Exams.)

1.The potential frequent interference Mr.Trump's daughter may make in the administration is     vexatious.

2. She sitting at another table in the cafe  was from time to time exchanging furtive glances     with him.

3. A delirium of mad violence swept all over the city after the decision was announced.

4. "I have been flooded with hundreds of calls......Getting accolades was not my intention."        said the headmaster.


5. It was a splendid morning and the air was redolent with perfume of rose petals scattered       all around on the floor.

6. " As they danced together, a spark of romance kindled between them." wrote he.

7. He is embroiled in a case that alleges he received bribe in exchange for political favours.

8. Spring water flowed down swiftly and clatter of the falling water muffled his cries.

9. In the play he was depicted as a very unctuous,truly horrific villain whom the audience         despised.


1. Under the right to freedom of thought we have right to have our own private thoughts              even if they are heretical.

2. A series of macabre incidents involving violent injury and death ensued announcement of     the court decision.

3. Both the brothers quarreled continually, started vituperating and finally fighting each             other.

5. It is her selfless and candor nature that has made her popular among her friends.

6. Pebbles of different colours spattered along brims of the road presented a charming              view.

7. Many munificent patrons and donors contribute in money and kind to our institution.

8. They believe that events like tornadoes and earthquakes are cosmic retribution  for              human pride.

9. She is no more novice in cooking, she has emerged as  an expert cook now.

10. We all remain resolute  in our endeavour  to improve working of the company.

1. "Their alacrity in adjusting instilled them with confidence, and also pragmatism." said he.

2. "Beneath all her smirk  and insinuation, her derision was quite evident." said he.

3. A detailed and frank disquisition on the subject brought many unknown facts into light.

4. It is pertinent to state that leaders, not laggards, contribute to progress pf the institution.

5. He is chary  of fiddling with something that engenders his goodwill.

6. "Liberal critics revile the emperor as a ruthless ruler who tortured and imprisoned his opponents."

7. Illiteracy and underemployment among people is a big impediment to growth of villages.

8. He paced briskly back and forth in anguish as he spoke into his cellphone.

9. He being a fugitive in his country sought asylum in the United States.

10. She and Trump visited the aggrieved families to commiserate about their troubles.

Posted by lessonenglishgrammar.com at 01:48 No comments:

(Based on latest changed style used in Competition Exams.)

Choose the correct Meaning of the phrase/clause in bold and underlined.

1. The boss served him with  a mild but firm warning for his misbehaviour in the meeting.


2. A dispute arose and it created angry and bitter feelings between them.


3. A fault developed in the computer and the information stored in it got wiped out.


4. It is such an issue people would like to argue even fight about it for hours together,


5. The demonstrators went out of control with anger and destroyed property.


6. It was very difficult for me  to understand his unrealistic and impracticable plans.


7. From a humble beginning he soon grew into a prominent business magnate.


8. The leadership remained upset and bothered throughout those days.


9. His exuberance withered and he grew ill-tempered and gloomy in his old age.


10. He gave an indirect reference to impose new taxes in his speech.


Choose the correct Meaning of the phrase/clause in bold and underlined.

1. The authorities have decided to refill the market with sufficient quantity of sugar to meet with its increased consumption during ensuing festival season.


2. The government is making strenuous efforts to enliven and invigorate the sagging economy.


3.His father repeatedly imparted him with instructions instilling a sense of responsibility in him.


4. Immediately a dinner party without any prior preparation was arranged in his honour by us.


5. Malicious statements by various leaders have maligned and corrupted the whole political atmosphere.


6. In the absence of sufficient evidences against him the court has decided to declare him not guilty of criminal charges.


7. Before making any agreement with the company he examined carefully  all the aspects of it .


8. People could hardly make out anything of the puzzling and unclear statement he issued in the press.

9. His explanations why he was late to dinner last night could not bring down his parents' anger.

10.The project though in its beginning stage is slowly but steadily making progress.

1. In United Kingdom, as more and more immigrants grow richer and have higher-income, they drift from the labour party of the country.

2. As I  found her telling lies many a time, my trust in her has grown lesser.

3. The viewers get a very distorted and inaccurate information about goods and commodities through advertisements displayed on television.

4. The President inducted a team of inquisitive and innovative personnel into his advisory council.

8. They raised a temporary wooden structure which was very weak, unstable and liable to break.

9. Shifting of ill-acquired money to offshore accounts in a secretive way landed him in hot waters.
1.ostensibly 2.surreptitiously 3.irrevocably  4.suspiciously


1. The doctor advised him to move to an open and salubrious countryside area if he wants early recovery from his illness.

2. Once he fritters away his wealth, his fair-weather friends  will dissipate without a trace.

3. Mr. Trump was not perturbed and discomforted by the protests against him outside meeting venue.

4. He got himself examined by two doctors but reports of both the doctors did not agree   with each other.

5. His life is full of difficult and tough times but he always remains happy and cheerful.

6. Of late activities of China towards India are of unfriendly, inimical and hostile nature.

7.The lack of coordination among their team mates contributed to their abysmal defeat in         the match.

8. These remarks reflect their incredible disapprobation  of his dissipated activities.

9. Parents are often oblivious of faults and follies of their wards.

10.  He is the only member of the committee who dared to show temerity  to stand up against the chairman.