There are two types of Interrogative sentences:

-Interrogative sentences starting with helping verbs like is,am,are,was,were, do, does, did, shall,will,would,can,could etc.

- Interrogative sentences staring with 'wh' words like which,why,when,where,who, whose, whom etc.

The Reporting speech generally contains a Subject Verb and an Object. Sometimes Object is missing.

A Subject or an Object is formed of a Noun or a Pronoun.

First Person is the person who is speaking or is making the statement.


Third Person is the person, except above two categories referred to in the statement, about whom reference is made in the speech.

Third Person
Singular ----
He
His
Him OR
She
Her
Her

The teacher said to the student,"What is your name?"

What is your name ?
(Reported Speech)

As already explained above, Interrogative sentences are of two types.

A. First starting with helping verbs like --
is, am, are, were, was, had, have, shall, will or would etc.

B. The second  type of interrogative sentences are which start with words like –
What,Which,Why,Who,Whose,Where,When, How and Whom etc.

While changing direct form of speech into Indirect form in both types of interrogative sentences, 'said to' is replaced by 'asked or inquired of '

'Inverted commas' are replaced by 'if  or whether' .

In case of second type of (B)-

No word is written in place of inverted commas.

The stranger said to us," Have you ever been to our village?"

The interrogative sentence in the reported speech will be changed into simple or assertive form of sentence.

It will be -- 'You have ever been to our village'

'Our' is the first person and it will change according to Subject i.e.'the stranger' which is third person singular i.e. equivalent to 'He'.  But 'Our' is plural so its equivalent in third person will be 'their'.


The Indirect form of the sentence--

The stranger said to us," Have you ever been to our village?"
will be

The patient said to the doctor, "Why is it so that I am feeling dizzy ? What is the reason that I cannot walk even ? "

In indirect form of this sentence--

'said to' = asked or inquired of
Inverted commas will be removed without substituting any word.

The two sentences in positive form or assertive form will be

Why it is so that I am feeling dizzy. &
What the reason is that I cannot walk even.

The sentence in its indirect form will be :

The patient asked the doctor why it was so that he was feeling dizzy  and what the reason was that he could not walk even.

The patient inquired of the doctor why it was so that he was feeling dizzy  and what the reason was that he could not walk even.


Here are some sentences of this type for practice.

1. All the players said to the captain,"Are you not satisfied with the
performance of the team? Do you feel that we should do more practice to acieve
better results? What do you suggest in this regard ?  "

Ans. All the players asked the captain if he was not satisfied with the performance of the team and if  he felt that they should do more practice to achieve better results and what he suggested in that regard .


2. The inspector  said to the boy," Why did you disobey my orders? Do you not deserve to be punished ? Do you accept your fault and are you ready to appologise ? "

Ans. The inspector  asked the boy why he disobeyed his orders and if he did not deserve to be punished and if he accepted his fault and he was ready to appologise.


3. The father  said to his daughter," Where had you been for such a long time ? Why do you come home so late at night? When does your office close in the evening?  Can't you return home in time ? "


The father  asked his daughter where she had been for such a long time and why she came home so late at night, He asked her further when her office closed in the evening and if she couldn't  return home in time.


FOR MORE ON TOPIC IN DETAIL IN NEXT POST 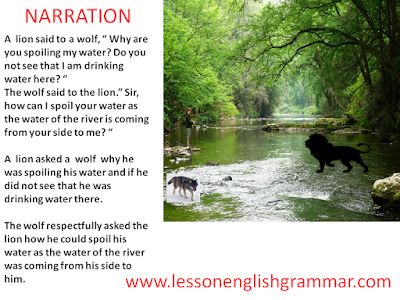 Email ThisBlogThis!Share to TwitterShare to FacebookShare to Pinterest
Labels: ....(Part II), Change of Interrogative sentences from Direct speech to Indirect speech--Methods in simple way with examples.