NARRATION --- Change of Interrogative sentences from Direct to indirect form of speech with examples.


Change of Different types of sentences from Direct speech into Indirect speech.

She said to me, " Will you go to your office today?"
Subject Verb     Object


She said to me
(Reporting Speech)

Will you go to your office today?
(Reported Speech)

The basic main rule of Narration is :

First Person in reported speech changes according to Subject in reporting speech.

Second Person in reported speech changes according to object in reporting speech.

Third Person in reported speech does not change.

All the other rules of simple sentences will be followed.

You (Second Person) in the reporting speech will change according to object (her). It will change into 'She'.

Me (First Person) in the reporting speech will change according to Subject (He). It will be 'him'.

Verb 'know' will change into its second form 'knew'.

So the sentence written above will be-
He asked her if she knew him.

He said to me," Will you convey my message to her? "


Interrogative sentences are of two types.


A. First starting with helping verbs like is, am, are, were, was, had, have, shall, will or would etc.

In such sentences, the sentence is changed from interrogative form to assertive sentence.

The helping verb is shifted to its normal place as per assertive sentence and is further changed as required.

Subject and object in the reported speech are changed according to rules.

The sign of interrogation is removed and it is substituted by full stop.
Comma and Inverted commas are replaced by the word ‘if ’.

Now a sentence with an object in reporting speech.

Some more examples are :

MORE ON TOPIC IN DETAIL WITH EXERCISE ON NEXT POST 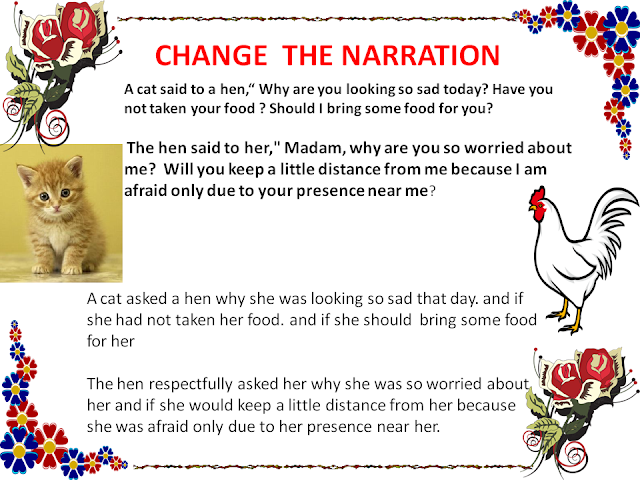