Generally, there is a single sentence for change of narration but many times more than one sentences are there  in a conversation. These sentences may be of same or different types.  So every sentence is required to be changed in the manner applicable to its type. For example --

There may be two or more simple sentences. i.e.

The son said to his mother," I am going to see my friend at his house. He did not attend the school today as he is sick.  I shall return late in the evening."

All the three sentences written above are simple sentences. These all will be changed in the same manner. These sentences after change will be -

Similarly more than one interrogative sentences can be put together.

The shopkeeper said to his servant," Have you not started your work yet? Are you not  slow in doing work?  Will you take more time to start it?"

These sentences are of interrogative type starting with a helping verb.

These all will be changed in the same manner. i.e.

The shopkeeper asked the servant if he had not started his work yet and if he was not slow in doing work. He further asked him if he would take more time to start that.

Similarly interrogative sentences of 'wh' type are joined together.

These sentences after change will be--

The old man asked the boy what he was doing there and why he was shouting so loud. He further asked him why he was disturbing him like that.

The sentences of three different types referred to above also can be joined together.

For changing these sentences their respective methods are used.

Some examples of such sentences are given here under for practice.

1. My friend said to me, “Are you coming to us today in the evening? Why don’t you join us over dinner  tonight?”

Further both of these sentences will be changed separately as required under rules for them.


My friend asked me if I was coming to them that day in the evening  and enquired further why I did not join them over dinner that night.

2. The inn keeper said to the traveler, “Why have you come so late? Do you not know that I do not allow late entry to anybody   at night?


These both sentences are of interrogative nature but first starts with ‘Why’ and the second with ‘Do’.

Both these  sentences will be changed differently in their own ways.

‘said to’ will change into ‘asked’.

In case of first sentence, no word is required to replace inverted commas but for the second these will be replaced by ‘if’.

These sentences will be as under:

The innkeeper asked the traveler why he had come  so late and if he did not know that he did not allow late entry to any body at night.

3. The mother said to her son, “What is the matter? “Why are you crying? Are you feeling unwell?”

These sentences are of interrogative nature. So  ‘said to’ will change into ‘asked’ and no word is required while removing inverted commas in case of first two sentences but for the third sentence 'if ' will be used.


The mother asked her son what the matter was  and why he was crying and if he was feeling unwell.

4. The old man said to the children, “Why are you making a noise here? Do you not know that I am taking rest?”


The old man asked the children why they were making a noise there and asked  if they did not know that he was taking rest.


5. The owner of the house said to the beggar, “Why are you knocking at my door? Do you need any help?”


The owner of the house asked the beggar why he was knocking at his door.He further asked him if he needed any help.


6. The villager said to the minister, “The prices of all the essential commodities are getting higher and higher. Can you explain the reason for this?”


Out of these two sentences, one is a simple assertive sentence and the second is an interrogative sentence starting with word ‘Can’.

Inverted commas for the first will change into ‘that’ and for second ‘if’.


The villager told the minister that the prices of all the essential  commodities were  getting higher and higher and asked  if he could explain the reason for that.


7. His daughter said to her, “You have travelled a long distance during the day. Will you not take rest for a while?”


These two sentences are of assertive and interrogative nature respectively.

‘said to’ will change for the first into told and for the second into  asked.

Inverted commas for the first will change into ‘that’ and for the second into ‘if’ .


His daughter told her that she had travelled a long distance during the day and asked if she would not take rest for a while.


8. His mother said to him, “I have been waiting for you since morning. Why are you so late today?”


His mother told him that she had been waiting for him since morning and asked why he was so late that day.


9. The merchant said to the customer, “Do you need goods of a good quality? I shall  supply you with very good quality goods.”


The merchant asked the customer if he needed goods of a good quality and told that he would supply him with very good quality goods.

10. His friend said to him, “You are looking unwell today. Why don’t you take any medicine?”

His friend told him that he was looking unwell that day and asked why he did not take any medicine. 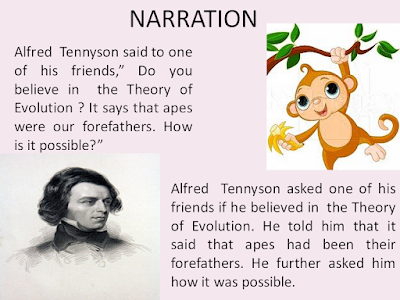 11.The official said to the boss," Can I go home early today ? Shall I have to submit an application for this purpose?'


The official asked the boss if he could go home early that day and if he would have to submit an application for this purpose.


12.The crane said to the fox, " Where do you live ? Will you like to have your dinner with me tonight?"

The crane asked the fox where she lived and if she would like to have her dinner with him that night.


13.The priest said to the bridegroom, " Where do you come from ? Will you marry this girl? "


The priest asked the bridegroom where he came from and if he would marry that girl. 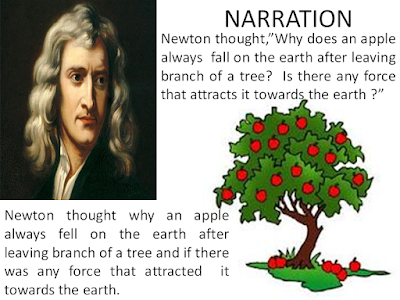 FOR MORE ON THE TOPIC IN DETAIL IN NEXT POST

Your views/suggestions about style/subject matter of blog are solicited. Do post/e-mail.